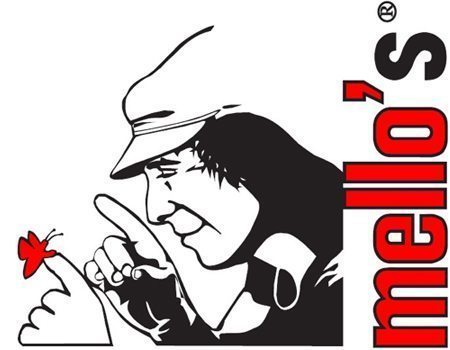 It was 1986 when the Mello’s brand was born. The name led back to Val di Mello, a valley located in the heart of Valtellina, famous worldwide for its environmental attractions, for the wealth of hiking itineraries and especially for the climbing routes to the point of being considered the “little Yosemite”.

The first historical Mello’s logo (the “big face“) is taken from the photographic shot that portrays a famous climber with a butterfly on his hand and that shows the idyllic relationship between climbers and nature with a unique and irresistibly romantic language.

With this brand, a first of a production of clothing dedicated to climbing was created, followed by a more technical one for mountaineering and outdoor activities in general.

It did not take long because the brand is an affirmation in the sector at an international level, accompanying great mountain personalities in their enterprises from 0 to 8000 meters.

The Mello’s collections, today as then, take advantage of the best fabrics available on the market and the garments are modeled to provide maximum support and unparalleled comfort during outdoor activities.

A help to small and large adventure projects where reliability, safety, comfort and resistance are not an optional, but a necessity. Mello garments are in fact designed by sportsmen and sportsmen who work for passion and spend a lot of time in the mountains and do not accept compromises in terms of performance.

All this, of course, combining the technique with its own unique and appreciated stylistic DNA.

When man was far from making his appearance on the planet, subduction phenomena of tectonic plates created gigantic drops of acid magma near the earth’s mantle, clear, fluid and lighter than the basalts that surrounded them. These drops were pushed upwards by the strength of Archimedes and quickly solidified becoming hard and compact granite.

One of these drops emerged from the depths of the Earth between California and Nevada. Glaciers, rivers and exogenous agents shaped the greyish mass creating the Yosemite valley. Another drop, formed many millions of years later and many thousands of kilometers away, emerged between the province of Sondrio and Switzerland and the peaks of the Masino-Bregaglia and its most famous lateral valley, the Val di Mello, were carved there.

Then, much later, the man came, who in these places sharpened his ingenuity to derive support from places of astonishing and inhospitable beauty. Even later came the modern man who, no longer undermined by the problem of obtaining nourishment, understood what arouses fear, such as the verticality of the walls of Yosemite and the Val di Mello, as a challenge rather than an invitation to distrust. Then began a race to “conquer the useless”.

In the 1950s, young American rock climbers attempted the extremely difficult climbs on the inviolate large walls of Yosemite with the use and abuse of artificial techniques. Once all the main walls were conquered, this first current inevitably ran out and was replaced, starting from the 70s, by the Stonemasters, or rock climbers exponents of a counterculture characterized by a new approach to the mountains. The walls were climbed in free climbing in search of freedom in a mystical spirit of fusion with the nature of an uncontaminated valley. An approach in stark contrast to heroism and the brutal challenge to the mountain that had marked mountaineering until then.

At the end of the 1970s, a movement similar to that of the Stonemasters affected the Val di Mello. Initially the young people concentrated on the stones of the valley floor to refine their technique, but also to “demystify the large walls” and the high peaks, the only objectives deemed worthy of classic mountaineering. These young people were invisible to that conformist world of the mountain which, unaware of being in front of an epochal revolution, with celia apostrophized them as “saxists”, to then have to capitulate in amazement at first in front of the conquests of the inviolate walls of the valley, then to the repetitions without artificial means and speed of the classic high mountain routes and finally the tracing of new itineraries of extreme difficulty faced without any rhetoric and in an attempt to leave the structures just climbed intact and clean.

The equipment of the saxists was new: light, smooth-soled shoes had replaced the heavy and clumsy boots, nut and friend had replaced the nails. But not only: even the clothing of these young people was different and conveyed that sense of nonconformity and light-heartedness typical of the stone movement.

It was in this great ferment that the Mello’s brand was born, clearly linked to the freedom and innovation that invested the valley from which it takes its name. The famous photograph by Jacopo Merizzi, which portrays the father of the saxism Ivan Guerini intent on dialoguing with the butterfly that has landed on the index finger of the hand, was therefore inspiration for the Mello’s logo as well as a symbol of the “sports environmentalism” of those years.

A groove in the granite that from San Martino Valmasino goes to ENE for 9 km towards the sky, up to the summit of Mount Pioda (3441 m): this is the Val di Mello, a nature reserve since 2009.

The placid valley floor bathed by the Mello river, the destination of the most classic of walks and sprinkled with erratic boulders used for bouldering, is surrounded by an imposing rocky belt on which very interesting climbing structures have been identified (Precipizio degli Asteroidi, La Mongolfiera, Lo Scoglio della Metamorfosi, the Pappagallo, Le Dimore degli Dei …) and on which legendary rock routes run, including the famous Luna Nascente, Il Risveglio di Kundalini, Nuova Dimensione (the first VII degree route in Italy), Oceano Irrazionale, Cristalli di Polvere (the first VIII grade route in the valley),…

Further up, the lateral valleys develop, suspended by the action of the Quaternary glaciers and striped by clear and sparkling waterways broken by suggestive waterfalls, primarily those of Ferro and Zocca.

The southern valleys (Romilla, Temola, Mezzola and Arcanzolo) are not freely accessible because there is that portion of the reserve called “integral”, while the five northern valleys are a popular destination for hikers: Val del Ferro, Val Qualido, Val di Zocca , Val Torrone and Val Cameraccio.

These valleys are crossed by the Sentiero Roma which joins Novate Mezzola in Valchiavenna to Chiesa in Valmalenco with 5 stages, 65 km, 4700 meters of elevation gain, 300 meters of chains, 8 crossings and a maximum altitude of 2950 m. The Sentiero Roma is the more challenging and famous hiking trail of the Central Alps and is the fulcrum, in alternate years, of a race in the mountains among the most beautiful of all the Alps: the Kima Trophy. It is a path of 52 km with 4200 m of elevation gain that crosses 7 passes all above the 2500 m and which boasts the signature of the greatest champions of the specialty in the gold register.

In the relevance of the Val di Mello the only structure managed at high altitude is the Allievi Bonacossa refuge in the upper Val di Zocca, but to facilitate hikers and mountaineers, to this is added the Molteni-Valsecchi bivouac in the Val del Ferro, the Beef in Val Bivouac. Nougat and the Kima bivouac in Val Cameraccio.

These valleys are crossed by the Sentiero Roma which connects Novate Mezzola in Valchiavenna to Chiesa in Valmalenco with 5 stages, 65 km, 4700 meters of positive height difference, 300 meters of chains, 8 passes and a maximum altitude of 2950 m. The Sentiero Roma is the the most demanding and famous hiking route in the Central Alps and is the fulcrum, every other year, of one of the most beautiful mountain running races in the Alps: the Kima Trophy. It is a 52 km route with 4200 m difference in altitude that crosses 7 passes all above 2500 m and which boasts the signature of the greatest champions of the specialty in the gold bulletin board.

In the relevance of the Val di Mello, the only structure managed at altitude is the Allievi Bonacossa refuge in the upper Val di Zocca, but to facilitate hikers and mountaineers, the Molteni-Valsecchi bivouac in Val del Ferro, the Manzi bivouac in val Nougat and the Kima bivouac in Val Cameraccio.

Mountaineering in the Val di Mello is aimed at high peaks, such as those of the Cameraccio coast, Torrone lace, Luigi Amedeo peak, Rasica peak, Castello peak, Zocca peak or Ferro lace, where beside to classic itineraries – which have become very difficult following the withdrawal of the glaciers – modern routes are unfortunately increasingly characterized by the abuse of bolts which relentlessly deprives new rock climbers of the possibility of finding, in addition to a test bench for their muscles and for his own technique, even that sense of adventure from which he could benefit until a few years ago.

If in spring and summer the Val di Mello is literally stormed by tourists, the influx of tourists decreases in autumn when the natural spectacle increases and the granite walls are bordered by the brightest shades and the sides of the mountains are colored of various colors. The beech, one of the most widespread essences with monumental specimens, turns the color of its leaves from a yellow-orange faded to a rusty red when it gets shorter, and then undresses and presents itself naked in winter.

In the cold season, tranquility is guaranteed: there are not many hikers and mountaineers who enter Val di Mello, also because of the short sunshine. Snow, ice and frost have a long life here. The cold, however, is not only a negative element, on the contrary. Numerous icefalls form on the large walls where enthusiasts of the ephemeral engage in breathtaking climbs. On the other hand, very few ski mountaineers are seen, discouraged by long approaches with skis on their shoulders and unaware of the fact that this is the modest price to pay to draw their tracks on the most beautiful slopes of the Alps.